Attribute (also called property or data element) is a piece of information associated with a user ID (e.g., gender=male, interest=sports, purchase=car) often with timestamps that can enable recency-based trigger targeting or sequential messaging.

Attributes can be distinguished by four key dimensions: 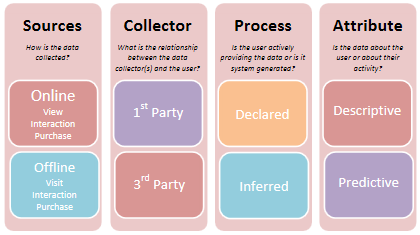 The input data may be collected from online or offline sources. Given the rise of mobile and connected devices, more offline activity is also now collected via digital devices thus attributes are more often distinguished by what the information used as an input to generate them.

The source of input data used to generate attributes can refer either to user activity (e.g., view, interaction, registration, purchase) or information about the user (e.g., gender=male).

Some organizations that collect, process and store input data have a direct relationship with the user. Data collected by these organizations is called "First Party Data." Some organizations describe the process of ”a first party that sells or shares data to a non-affiliated website or service," as "Second-party Data."[2] The recipient of this data is a "third party." Thus the rules around data ownership, use and control are governed only in relation to first and third-party definitions.

Oftentimes an attribute is generated from user activity across multiple organizations. For example, counting how many ad impressions were delivered in an Open Web campaign may involved user activity across thousands of publishers websites. Accordingly, modern privacy regulations focus which organizations control and are accountable for the appropriate processing of this collected data. For this reason, some privacy regulators state given the absence of distinctions "between first-party and third-party data in data protection law," using such criteria runs the "risk of interpreting data protection law in an anti-competitive manner."[3]

"For example, such risks could arise from an interpretation o f data protection law in which transfers of personal data between different businesses owned by a single corporate entity – such as a large platform company – are in principle viewed as acceptable from a privacy perspective, while transfers of personal data between independently-owned businesses are not, even if these businesses are functionally equivalent to those of the platform and the data is processed on the same basis and according to the same standards."[4]

Thus third-parties that create data products that span collection from websites and stores not owned or controlled by a single organization can offer smaller websites and stores that do not have the technical, data or service resources the ability to compete against large vertically-integrated companies.

The input data that is processed into an outputted attribute can be actively declared by a user or algorithmically generated. The process of generating an attribute can be defined whether the user actively supplies the information (i.e. "declared" or "deterministic" data) or whether it is generated from a system (i.e. "inferred" or "probabilistic" data). Thus, declared attributes are generated directly by consumers, while system-generated attributes are generated by software that often processes multiple events to generate a single attribute.

"Declared data is often assumed to be of higher quality, but some users are not truthful in filling out forms (e.g., lying about their income on a dating site)."[5]

An attribute's quality is thus better measured by how consistently the information correlates to people responding to the content, than a delineation in the input data source or process used to generate the attribute.